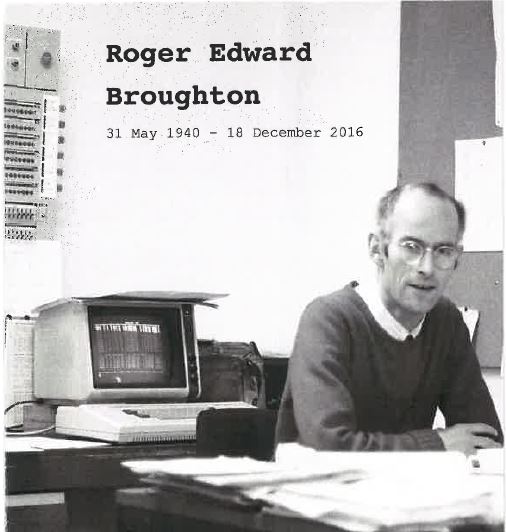 These pages were written and developed by Roger Broughton during
and after his many years of employment at Newcastle University.

Sadly, after a short period of serious illness Roger died on 18th December 2016.
During the final weeks of 2016, a group of current and retired staff from
the University began working with Roger to take custodianship of
the computing collection, its database and these pages. Plans are afoot
to keep alive the legacy left by Roger: public exhibitions of the artefacts,
a revised version of this website (although we will keep this, Roger's version,
as an artefact in itself!), and a VR version of his Museum.

If you are interested in knowing a little more about Roger, in his own words, see this file. To know more about this museum, or to report broken links, errors, etc., please email us at:
comp-artefacts@ncl.ac.uk

And now over to Roger himself: the opening paragraphs of his original website...

Because there are a lot of photographs, the modus operandi
is to present a thumbnail size photo which when clicked on presents
a better size photograph, 600 pixel wide, and descriptive text.
Sometimes clicking on the 600 pixel photograph produces a fullsize one.
The fullsize photograph is typically 2500 pixels wide and will be bigger
than your screen. If you have a ⊕ cursor you can position it over
a point in the image you want to see magnified and left click the mouse button.
In the magnified image you will have a ⊖ cursor which when left clicked
will take you back. In this way you can explore the FULLSIZE image.
Alternatively you can use the scroll bars.
To escape from a fullsize view use the web browser ⇐ button.

We have ten showcases on view at the moment:

Sometime, we would like to find a safe haven for the collection.